Home » what to do » art & culture » Walt Disney & the Olympic Theatre

Last week we explained you how a visit to the Palladio Museum could turn out to be an amazing experience for kids. Today we recommend another must to see in Vicenza, with some tips for enjoying it with the whole family.
I went to the Olympic Theatre for the first time when I was 18 years old, during a school trip. I was so taken by the beauty of the place, that 10 years later, I came back to visit it again with my boyfriend. My experience is a proof of what is magical the atmosphere that reigns there, since you know teenagers are more interested in other muscles than the white ones of statues … 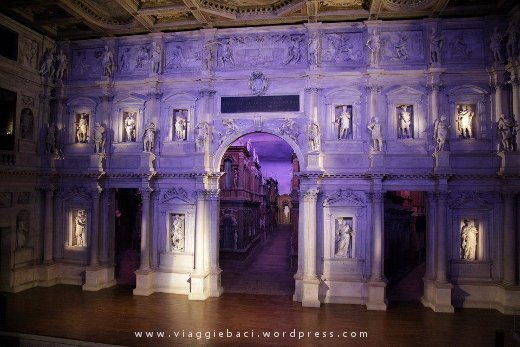 Having a look to the theatre from outside you may be tempted to save your money and pass by. Please, look before you leap. Admiring the inside’s incredible beauty, you’ll forget about the lack of  a noteworthy entrance gate.
Walking around in the courtyard,  you can easily understand you are inside a medieval fortress, but, quite for sure, you could not guess that Palladio built the theatre inside the old city’s prison. So, don’t expect to pass through a twinkling foyer and wait under Venetian chandeliers before sitting down in the auditorium.

Entering, you will be captured seeing the amazing street behind the Porta Regia, the huge arch which divides the scaenae frons in two symmetric parts. Even if looking much longer, it is only 12 meters long. That’s the reason why it’s considered one of the most beautiful example of Renaissance perspective.

The seven background perspectives are not part of Palladio’s project. When he died (1580), the theatre was finished by Vincenzo Scamozzi, who had the brilliant idea to create seven streets beyond the scaenae frons in order to recreate Thebes, the Greek city where Oedipus the King, by Sophocles, was set.With this classic Greek tragedy the Olympic was inaugurated in 1585. So there’s no doubts: Olympic is the most ancient indoor theatre in the world.

It is also the first “community property” theatre in modern Europe, since it belongs to the Olympic Academy and not to a private owner, as a king, prince or count. The Globe, by Shakespeare, was built in 1599 and destroyed by a fire few years later. The one you can visit today in London was rebuilt with the same shape in 1999, while the Olympic is still the original one built in the Renaissance time by the genius of Andrea Palladio. 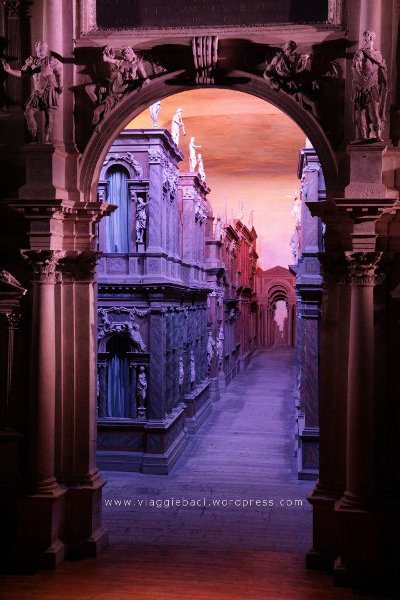 Sons & Lumière at the Olympic Theatre

The XVI century chronicles describe enthusiastically the success of Oedipus the King play, the harmonic perfection of Palladio’s masterpiece and the incredible lights effects used during the first performance. Of course, at the time, there were not colored spotlights to help Palladio and Scamozzi to obtain the desired effects. The ancient oil lamps, you can admire nowadays inside the showcases in the book-shop area, were the only kind of technical instruments available.

In order to make modern visitors enjoy similar lighting effects, nowadays, a Sons & Lumièrs show is held and it is included in the regular entrance ticket price. You don’t have to book it in advance, just be there 5 minutes before it starts.
Your children will love the show with Fantasia soundtrack, while teenagers will prefer the one with Pink Floyd music. Of course, if you prefer the original play, don’t miss the one dedicated to Oedipus the King.

Sons & Lumièrs shows are scheduled every day at following times:

In Spring and Autumn the theatre is used for concerts and plays: you can find the theater seasonal planned shows here.

We loved the architectural beauty of the theatre as well as the tailored-for-children Sons & Lumière show. Our kids were hypnotized by the lights moving at the rhythm of Walt Disney soundtrack.
But, most of all, we liked the idea of entering in a such wonderful place with a family ticket: for only 14 €, a couple of adults with children (one, two or six … it doesn’t matter!) can buy Vicenza Card, which includes the Theatre, the Palladio Museum and other 5 important cultural sites in the city. It is valid for 3 days, so you can leisurely visit the city with your family. 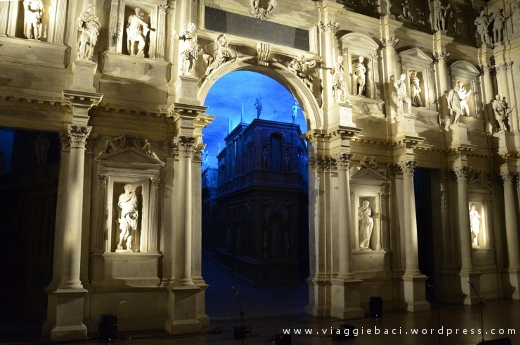