Home » destinations » Visiting Sicily: the greatest island for a family vacation to Italy

Sicily Island is a beautiful place to visit year-round. It has a warm climate, and it’s always sunny. It’s an ideal place to visit with family and children. There is no single place that’s best to visit on the island with children because Sicily is a good place for family holidays.

If possible, try to spend time on both the east and west coast. If you’re already in the neighbourhood, it’s a great place to see when you don’t know where to go with children in Italy. Just in case, make sure to check out this Sicily guide for families because there are plenty of things to know about the place.

There are a few ways to get to Sicily. It has two international airports (Palermo and Catania) and several domestic ones. It’s also possible to get there by bus and ferry. However, Sicily is not a small place. It’s always recommended to rent a car, which can be great for the children. If that’s not an option, there’s plenty of public transport in Sicily in the form of buses and trains. Whatever you choose, be prepared to spend some time on the road.

The Best of Sicily to visit with children 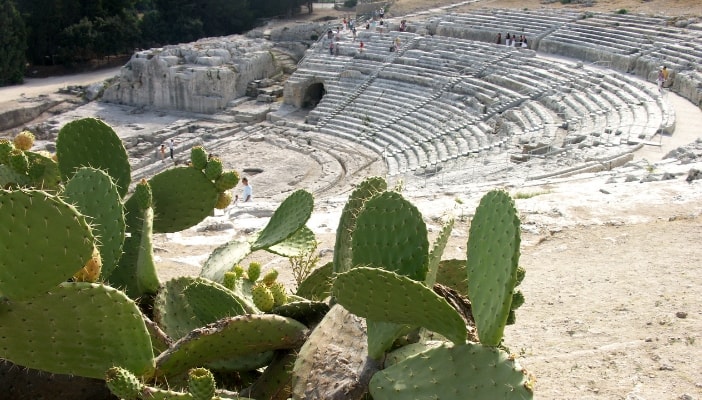 Agrigento and the Valle dei Templi

Sicily is an ancient place, and that’s very apparent at the Valley of Temples. It’s a UNESCO World Heritage Site. It’s generally considered one of the most important archaeological dig sites in the Mediterranean. The spot was originally a Greek colony from over 2,000 years ago. It’s so amazing because it’s almost entirely intact. Its monuments still stand, and it can be fascinating for children to see how people used to live in the past, especially history that they can practically touch for themselves.

There are only three volcanoes in Europe, and Mount Etna is the largest of them. The most interesting thing about it is that it’s still active. Because of that, it’s formed its own microclimate. Kids are often fascinated by volcanoes, and Etna is unique. The base and the top often have different weathers, as it can be colder on the top. There are several budget options for visiting it – you can see it by cable car, bus, and even helicopter. 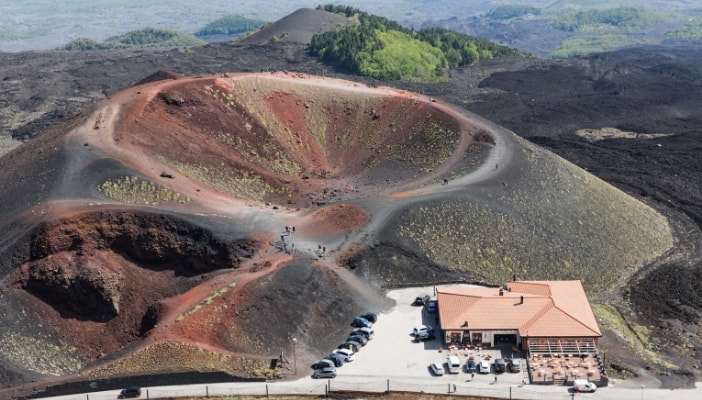 Syracuse: the city on the Ionian coast

There’s no spot on Sicily as intriguing as Syracuse. It’s one of the oldest settled places on the island, and you can practically touch history while roaming its streets. There are plenty of things to see, too, like the old Greek amphitheatre, the Ear of Dionysus. It’s the largest building of its type in the world, and you can often find live performances there. Another worthwhile spot is Ortygia, which is the historical centre of Syracuse. This island’s just off the coast of the city. It is filled with historical wonder and charm. Spots like the fountain of Arethusa and the mythological stories that surround it are something everyone should see.

Things to do in Noto: one the most loved destinations in Sicily

Noto is one of the most beautiful cities in the entire wider region. It’s a UNESCO World Heritage Site, and it’s also known as the Capital of Baroque. Everywhere you walk, you’ll see something gorgeous, especially the architecture. It can serve as a fantastic historical and artistic lesson to anyone, and kids will especially love its magical feel.

Walk around the centre

Noto’s centre and its main street Corso Vittorio Emanuele are absolutely breathtaking. Starting from the Royal Gate, you’ll get to explore the three squares in the area. Everything is stunning, as the decoration and ornaments of royal symbols of the Bourbon dynasty and the old and unforgettable churches.

Noto is known for its amazing food. It’s not only about history here. Foodies will enjoy sampling the seafood delicacies that many of the restaurants in Noto have to offer. Many of them are very affordable, too. It’s not something one should skip.

Unlike many other beaches flocked by numerous tourists, Calamosche is far from typical. While it’s not secluded, don’t expect things like bars and restaurants. It’s part of the Vendicari Reserve, and it’s a place where people go to relax. It’s one of the most stunning parts of the island. 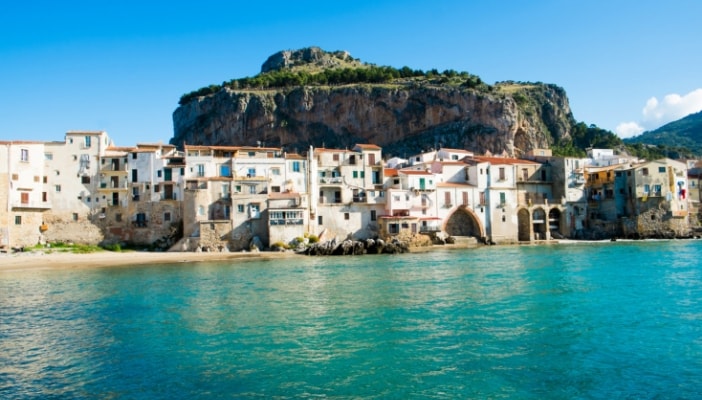 Cefalu: what to do and the best beaches in Sicily

Cefalu is another historic town on the Northern coast of Sicily. Here you’ll find glorious sights, like the Duomo di Cefalu, which is one of the grandest cathedrals of its type. La Rocca is another fascinating spot that every visitor should see. These are the remains of an old Arab citadel from over a thousand years ago. Even though there are plenty of historical beauties in and around this city, the things that it’s known for the most are its beaches.

Few things can compare to a beach that’s 100% natural. On the surface, it looks a bit unkempt, but it’s very well-maintained. It’s very close to the city, and there’s a wall surrounding it that you can climb for a better view. It’s slightly rocky, but it’s worth it.

This other fantastic beach is quite popular with surfers. It’s also a very relaxing beach. It’s a beach filled with sandy pebbles, and it’s ideal for doing nothing but lounging around. The kids can take a look at surfers away in the distance as they’re playing in the sand.

This is a beach that’s ideal for those that simply want to relax. It’s a great place to see if you’re all about rest. It is very rarely crowded. It’s an ideal family destination as it’s not far away, but no crowds are getting in the way.

Selinunte is one of the most popular archaeological sites in Sicily. Due to its location, these old abandoned ruins have stood there untouched for a very long time. It’s located on a high plain and overlooks the sea. Here you’ll have endless gorgeous views of both the old city and the surrounding region. This is also one of the largest archaeological sites in Europe. It is on par with pretty much any other spot in Greece. The area is divided into a few sectors, each with its own flare. There is also the nearby village of Selinunte, though it doesn’t really compare to the ruins.

This type of complex is commonly found in old Greek cities. The one found in Selinunte is particularly beautiful. It’s divided among five temples. Temple C is the oldest one, and it was built around 6th century BCE. 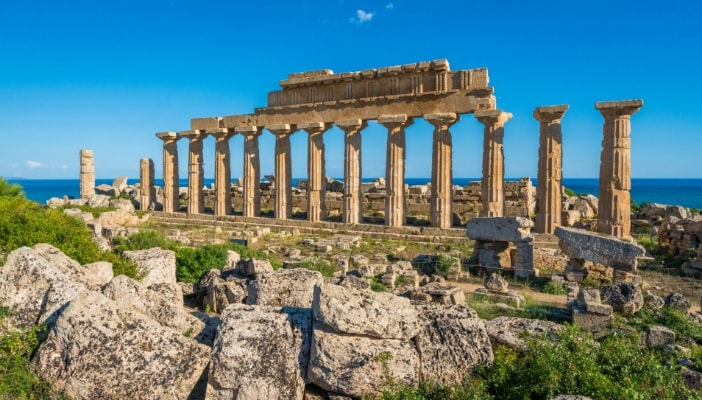 Although not the oldest, the eastern temples are Selinunte’s most beautiful. Temple E is particularly unforgettable. It was originally constructed in the 5th century BCE but it was reconstructed and finished in 1958. It’s the most complete of all the temples, and arguably the most beautiful one.

Once you’re done with the temples and the living history, make sure to visit this excellent eatery. It’s located very close to the dig site on the beachfront, and it’s an affordable spot with great food. It has a delightful terrace where you can enjoy a relaxing afternoon after exploring the fascinating temples. 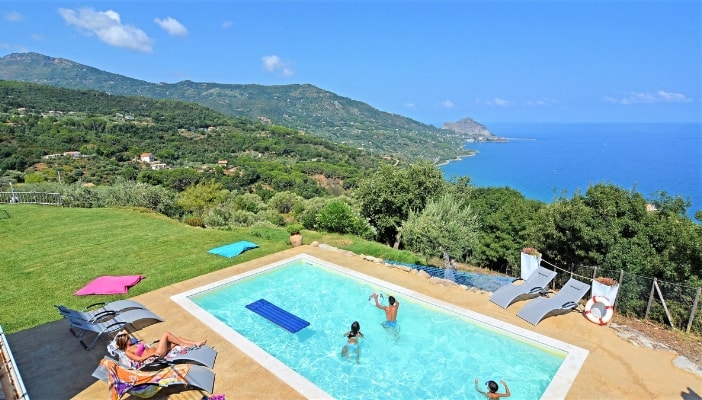 Isn’t this fun? This is our fav place to stay in Sicily with a toddler

Where to stay in Sicily with a toddler

Sicily is generally a great destination to visit with family and kids. There are plenty of family-friendly hotels, B&B, apartment and villas on the island, so your choice would come down to personal preference, but if I have to tell the truth, we always rent a flat or a villa when we travel with kids. It’s so much comfortable, practical and easy-going. We can arrange meals, relax and have fun without considering the strict hours for breakfast most of the hotels have.

The best destinations to stay at when visiting Sicily are Cefalu (on the North coast for Sicily) and Noto (on the South Eastern coast). As previously mentioned, Cefalu is a superb spot for beach lovers, and it’s a great starting point to visit all the North coast. Those looking for great accommodation can choose between Villa Rita – that has a breathtaking view – up to 6 beds and Terrazza Gabbiano di Sotto, which has four beds in the historic centre of the town.

If you land at Catania, you can easily reach the city of Noto in one hour and a half drive. We particularly love this place, as it is in a strategical area, with so many things to visit: art, culture, nature and amazing coastal spots. Villa Pigna Blu is then a superb villa to rent, up to 8 beds, that is perfect for two families travelling with kids in Sicily. 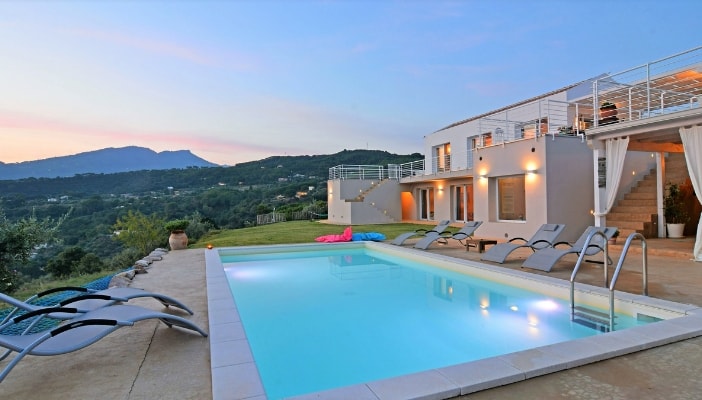 Sicily is one of those destinations that will keep you coming back. It’s a fantastic family-friendly destination, filled with some of the most beautiful attractions in the entire wider region. If you do choose Sicily, you definitely won’t regret it.

Pin it for later. You won’t regret it! 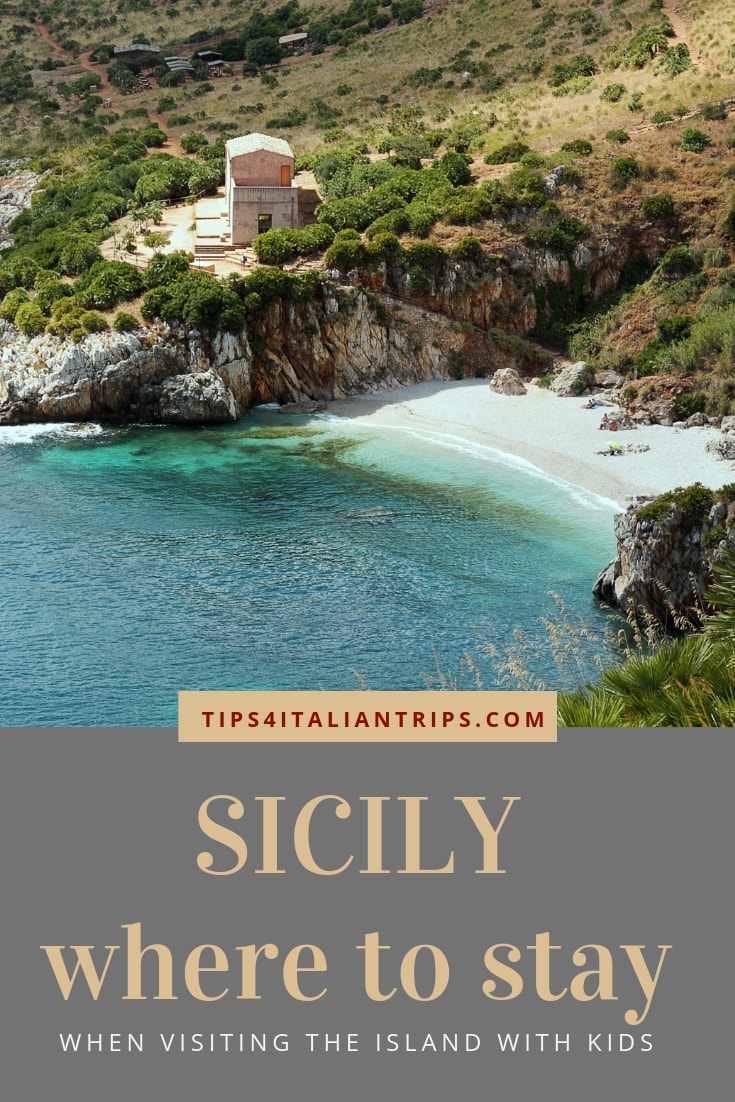 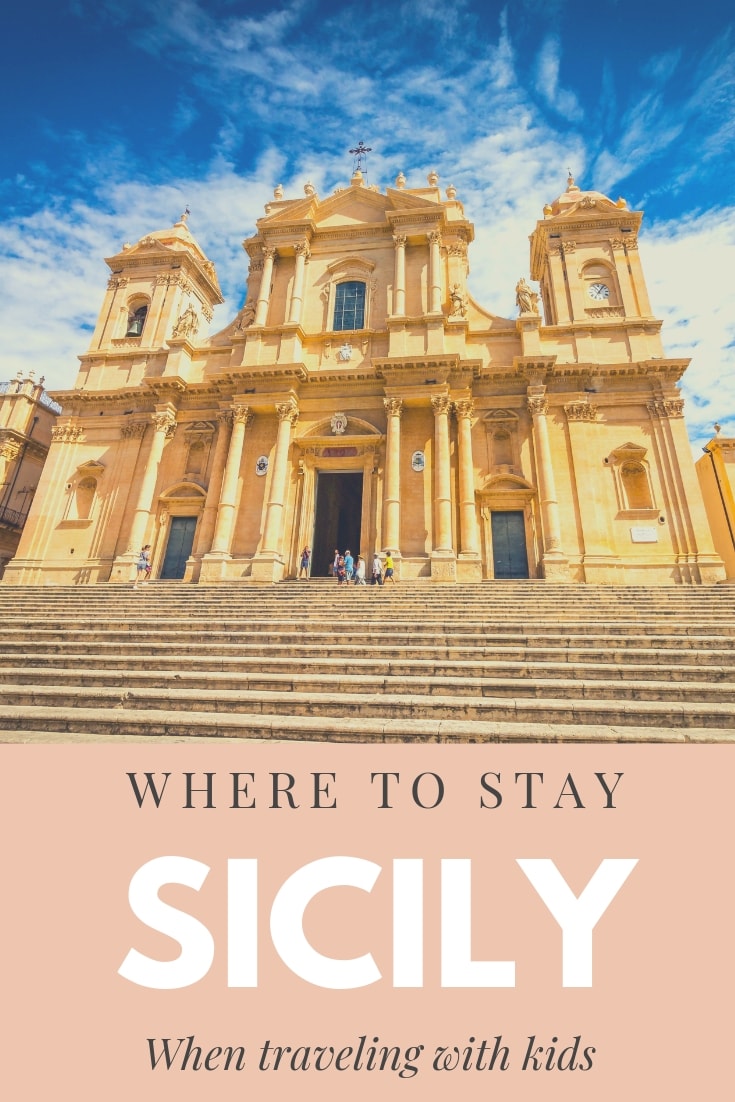 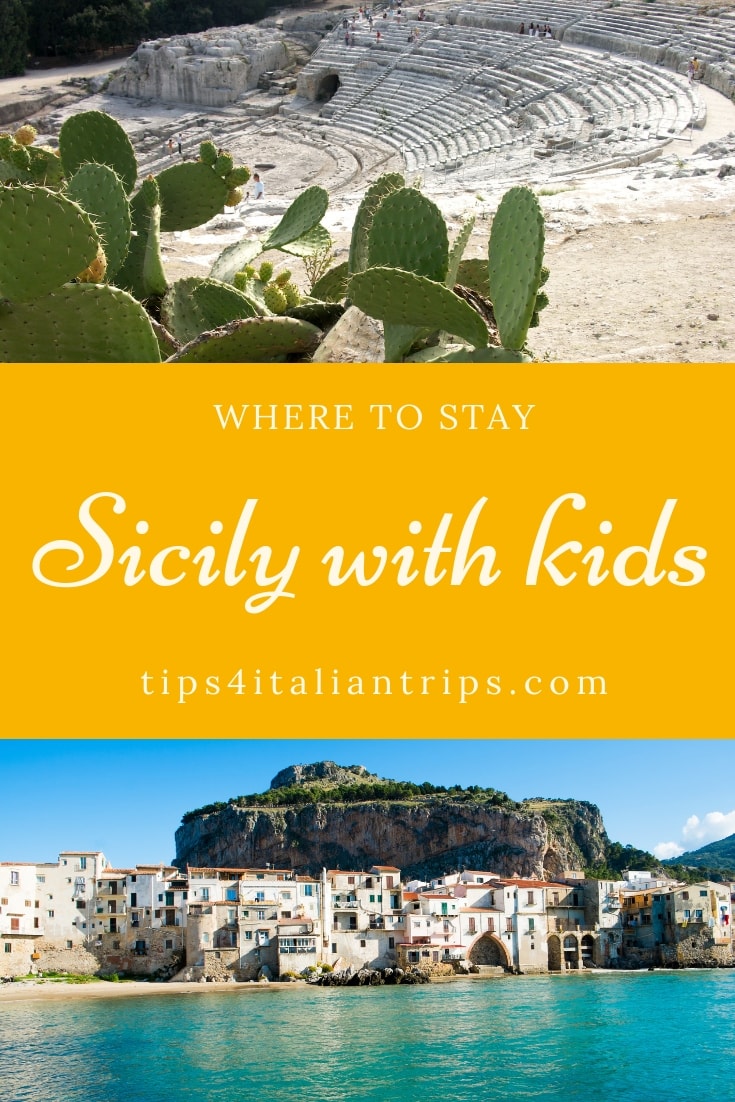