Travelling by train in Italy

Travelling by train in Italy

Travelling by train might be a good choice, especially if you are a family. It is relaxing for parents and fun for the kids. And you don’t have to worry about directions, signs, maps or traffic. However, there are a few things you might want to know about Italian trains. 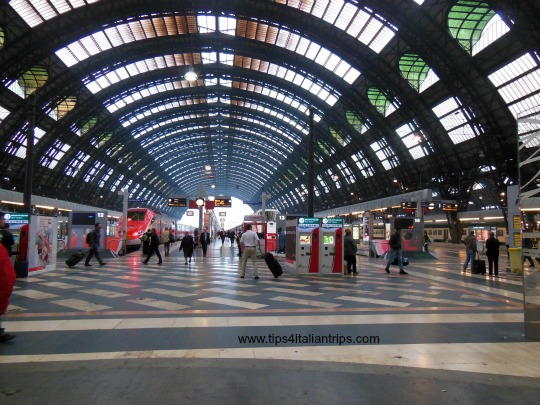 Trenitalia is the historical rail company in Italy, changing names and ownership over the years. 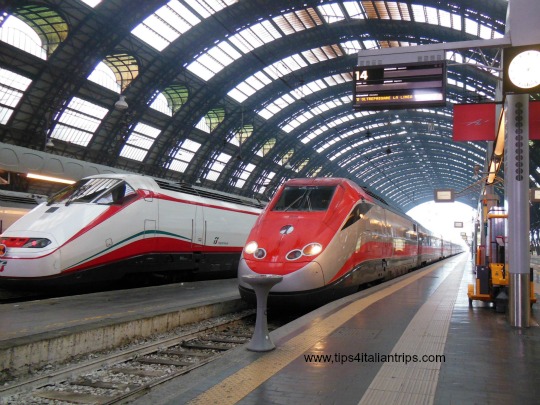 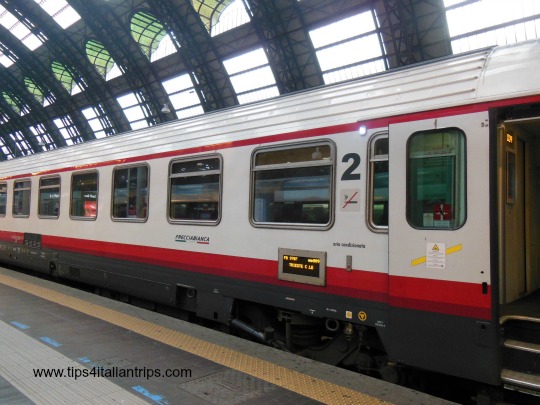 High-speed trains usually cost higher than Intercities and seats must be booked in advance. Unfortunately, Intercities are very often late and take a much longer time to cover the same distance. However, they might stop in places not covered by high-speed trains, which generally only stop in big cities.

All types of trans have First Class and Second Class cars: the class of service is written on the outside side of the car (a big ‘1’ for First Class, and a big ‘2’ for Second Class). All trains are not smoking.

Luggage can be places overhead or the beginning or at the end of each carriage. 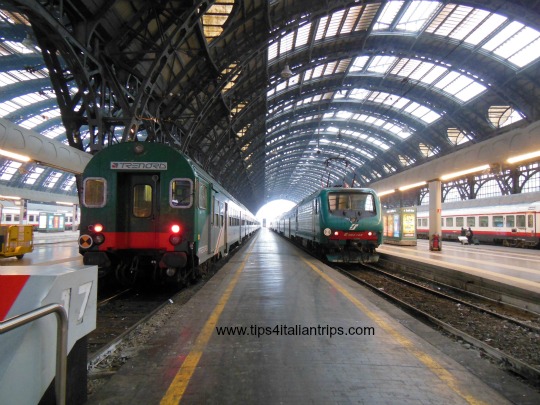 All stations have the big train schedules located throughout the area. Departure times (“Partenze”) and Arrival times (“Arrivi”) are shown on different displays. The Departure display shows the final destination of the train (which may not necessarily be your destination), train ID number (which is also shown on your ticket if you have a reserved seat), delay if there is any, and platform (“Binario”) number. Likewise, Arrival displays show the station/city where the train originally departed, train ID number, platform number and delay if any. 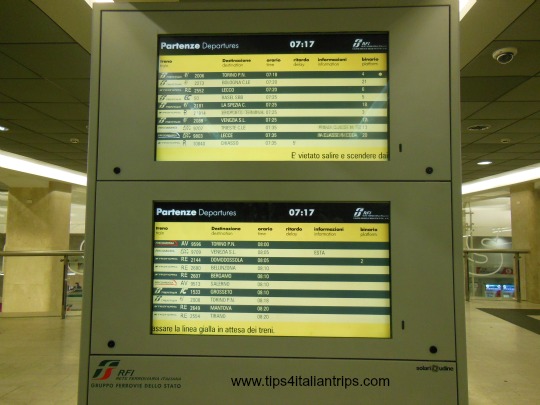 IMPORTANT: for any train, except high-speed trains, you must validate your ticket in the yellow boxes found at the station; failure to do so might cost you a hefty fine.

Overhead on each platform (binario), you will generally see an Arrivals display specific to that platform (small stations might not have these). Be aware that other trains might arrive before yours, so observe the display, as your train will be shown on the board before it comes at the station. Most trains also have a board on the side of the coaches, showing final destinations and, sometimes, also stops along the route. This might be another way to make sure you’re boarding the right train. Otherwise, simply ask… 🙂

It is possible, of course, to buy tickets at every station, either at the ticket counters or the automatic machines (normally with touch-screens and multilingual). Alternatively, it is possible to purchase them online.

The cheapest fares are the best, we all know it! But sometimes when travelling with kids, it could be a great solution to buy a base fare ticket, in case you need a last minute change. 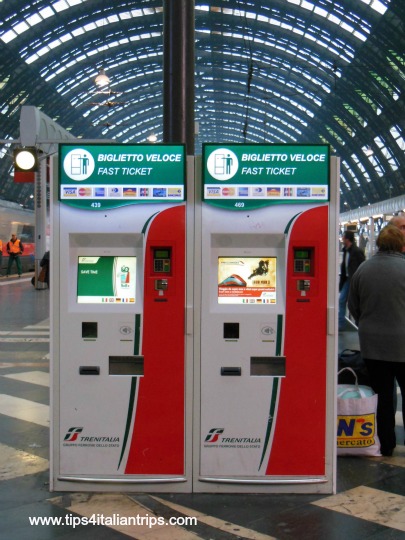 Both companies – Trenitalia and Italo – have a useful app where tourists can buy tickets and check timetables. The app works on Ios and Android as well. 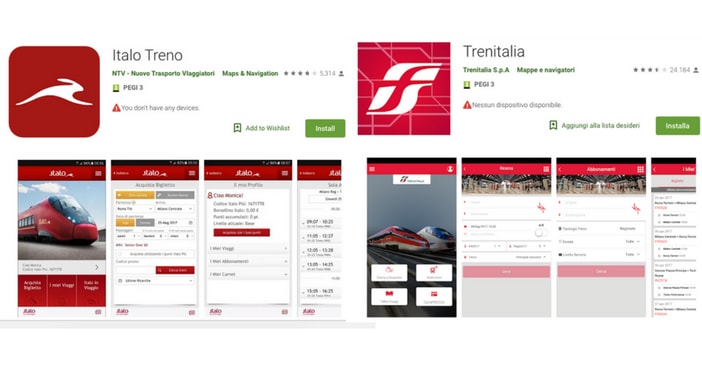 Travelling by train with Kids to Italy

Unfortunately, children discounts are quite low compared to other countries.

On Italotreno trains, kids up to 4 years old travel for free but only if they do not take a seat (therefore if they travel on an adult’s laps). If they need a chair (which for long distances is almost necessary) and if children are older than 4 but younger than 15,  they will benefit of a 25% discount off the Base Fare or 50% off the Economy Fare.

On Italotreno trains, you will also find changing facilities (placed in the toilet of coach n.8), free wifi (not very handy to connect through), vending machines with snacks and drinks and a cinema coach (with small screens placed along the corridor; travelling on this coach will cost you a few euros more; movies are only in Italian). 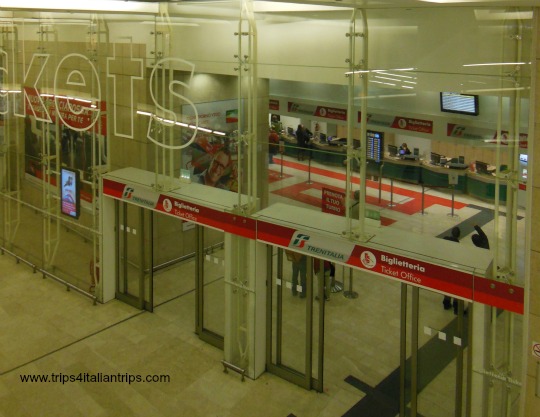 On Trenitalia trains too, kids under 4 travel for free if they do not take their seat. Children from 4 to 15 or kids under 4 taking a seat have a discount between 50% and 30% off the full price, depending on train types and destination. On Regional trains, children up to 12 years old have a discount of 50%.

Trenitalia also offers a family package called “Familia”, valid on all trains except local ones (Regionali). The offer is reserved for groups of 2 – 5 people, with at least one adult travelling. The package includes seat reservations free of charge and the following discounts:

This package has limited seats, depending on the train, the route and the date. To buy the offer online, indicate the number of people in the form; a list of price options will be shown – choose the “Familia 20%” one. 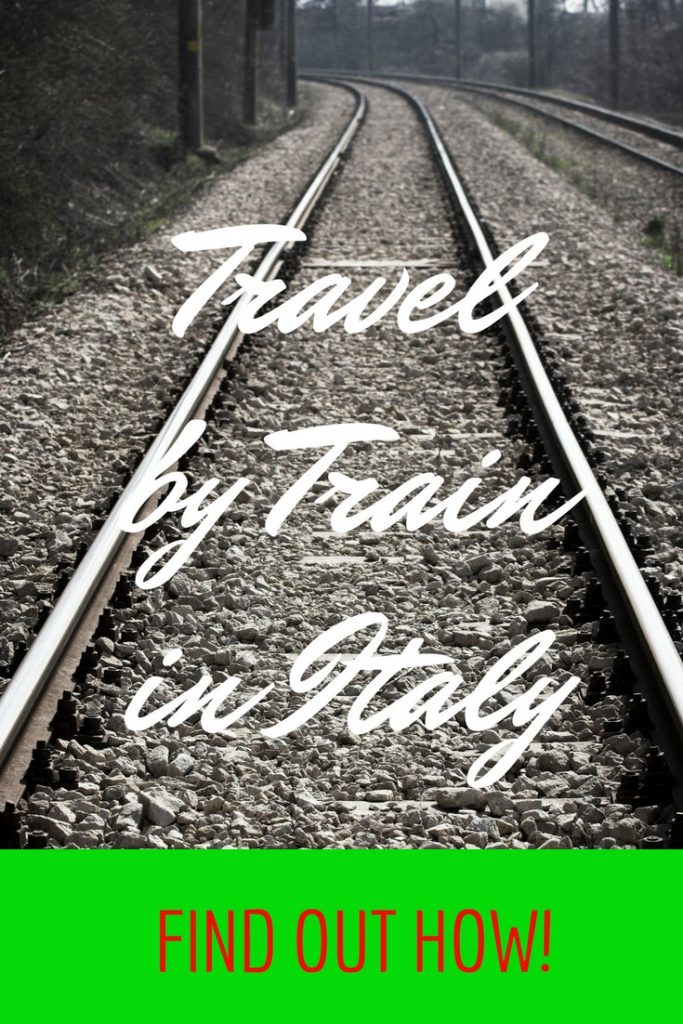