Home » what to do » art & culture » The Egyptian Museum in Turin

I always thought emotions and memories are the best gifts a person can receive. Objects go out of fashion and often finish to be locked in some dusty and dark closet. Emotions and experiences don’t. They become even more precious as time passes.
I had the idea of giving one of this kind of presents to Samir last summer by visiting the Egyptian Museum in Turin and he was excited about it.
He’s going through that part of life, that almost every child has, in which you are tremendously interested in mummies, sarcophagi, pyramids and scarabs. It’s the period of life when a kid says : “When I’ll be grown I will be an archaeologist…no, wait!!…an Egyptologist”.
I remember the same passion when I was 8 or 9 years old and I’m so happy to see the same enthusiastic light in his eyes. Egypt is a country we both would love to visit. So what a better idea to get closer to it than visiting one of the most beautiful Italian museum, and one of the most important in Europe regarding ancient Egypt. 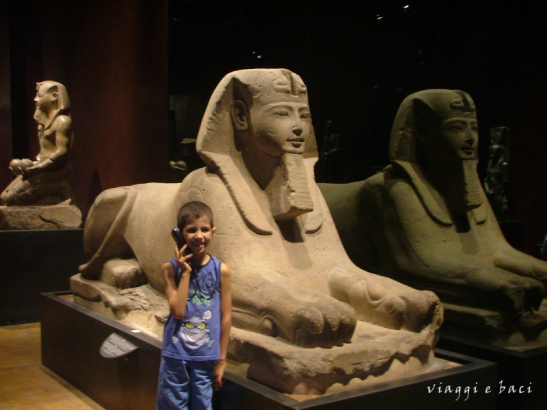 The Egyptian mummies inside a XVII century Jesuite School

Visiting the ancient Egyptian museum in Turin is like travelling back in time, not only for the archaeological pieces exhibited. The building itself is an interesting work of architecture. It is a 17th century masterpiece by Guarino Guarini, a famous Italian architect.
On the first floor, the exhibition style is so different from the modern one used in contemporary museums that you can feel the atmospheare of the time when the first archaeological pieces were collected. The chance to see this floor with this old-fashion look will not last long, since on July 31st 2013 works of renovation will begin.

The first “pseudo-Egyptian” piece of art came to Turin in 1630 thanks to king Carlo Emanuele di Savoia. His descendants continued this tradition contributing to increase the collection. The quantity of archaeological pieces became so big that in 1830 the Royal Museum of Egyptian Antiquities was funded and set in the building created by Guarini, at the time used as site of the Sciences Academy, but initially used – in the 17th century – as a Jesuit school.

Nowadays, the archaeological finds you can admire in the museum are around 6,500: mummies, sarcophagi, papyri, stelae, paintings, Pharaohs and divinities statues, vases, models, fictional sets reproducing rooms or spaces where the life (or death) of the ancient Egyptians took place, and objects of common use.
Other 26,000 pieces are stocked in storage rooms, to keep them well preserved or because they are valuable only as source of information. 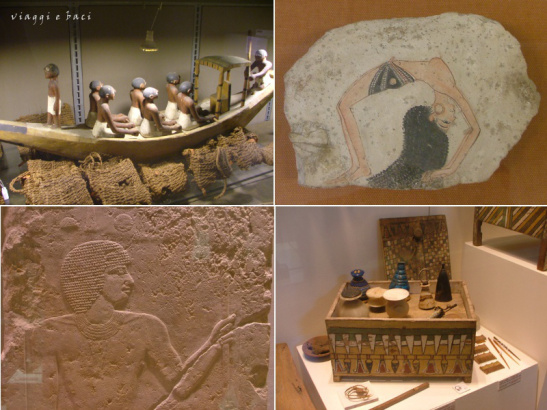 The Statuary and the Kha’s tomb

If the charm of first floor is due mainly to his old style look, the exhibition in the Statuary room at ground floor is breathtaking. A dark hall, where well used spotlights drive your attention to huge pharaohs’ statues, coming out from obscurity in an dreamy atmosphere.  Next to them other statues of important reign administrators, and divinities like Amon Ra, Ptah, Hathor and Sekhmet.
The amazing setting was made by Dante Ferretti, the Academy Award (Oscar prize) winner in 2005 for the best scenography, in the Martin Scorsese’s movie The Aviator.  In 2006 he brought his creativity to create this sensational choreography with the Egyptian statues in Turin. And he really did a good job.
I’ll never forget Samir astonished face in front of the statues. “Oh my God, mum, look here!”. He did not miss to accurately observe any statues’ details and had fun trying to imitate their pose and look.

The tomb of Kha exhibition is really impressive. It is a kind of “Gran Finale” for the museum. The tomb of Kha and his wife Merit, was discovered in 1906. Together with its more than 500 precious objects, owned by this rich family lived 3400 years ago,  arrived to Turin.
I won’t tell you more about it. I want you to experience personally the emotion of entering a true Egyptian tomb and discover many things about food, hobbies, fashion daily life and funeral celebrations of this millenary and legendary people.
Stay Alert: from June 17th til July 22nd 2013 the Kha’s tomb will be closed for works.

The Egyptian Museum of Turin regularly organizes activities for families. They will drive you to discover many curious and practical information about life in Pharaohs’ Egypt. You can also try to learn to read hieroglyphs. If you reserve in advance the visit, you can enjoy the activity in English language too.
All year long audio guides are available at € 4,00 per person. You can find them in English, German, French and Spanish. 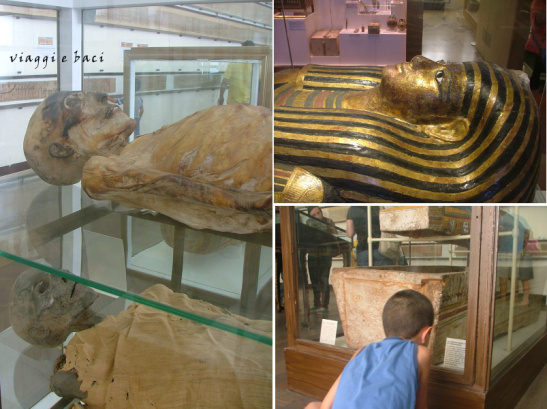