Skiing the Sella Ronda is the dream of every little or big winter sports enthusiast who plans a winter holiday in Italy. The “Sella Group” is a world-famous group of mountains, located in the beautiful scenery of the Dolomites and it is surrounded by four passes: the Passo Gardena, the Passo Pordoi, the Passo Sella and the Passo Campolongo. The area ranks among the most beautiful and popular round tours in Italy and in the Alps.

In winter, the Sella Ronda ski tour is something to add to your bucket list if you love Alpine Skiing. The journey takes you around the impressive alpenstock and provides a splendid view of its peaks. The Sella Massif stands in an area between the borders of Trentino, Veneto and South-Tyrol, and it involves the municipalities of Trento, Bolzano and Belluno.

The Sella Ronda is a round dance of emotions. It will remain in your heart, along with satisfaction, adrenaline and fatigue.

Skiing the Sella Ronda is extremely funny either. You can ski a whole day for about 26 km on always new slopes, without double passing once. The Sella Ronda is a circular carousel of about 40 km, practicable both clockwise – where orange signs will guide you through the tour – and counter-clockwise direction, following the arrows of the green path instead. There are no starting, nor arrival points. You enter the track from one of the four passes on the circuit, and you’re ready to go.

The Sella Ronda ski tour is not a race. You do not need to finish fast, and there is no time limit to complete the track, aside the slopes’ closing time. It’s just an incredible ski journey on the Dolomites!

The whimsical nature in which skiers are perpetually immersed will remain forever in your eyes. Big and impressive mountains that look like a painting, small and tiny villages in the background, silent woods and lots of snow. The panorama seen during the Sella Ronda is breathtaking. One of those that you could stare still for hours. You go up and descend fast, and then you go up again. You breathe pure air and come in contact with all the traditions of the four Ladin valleys you cross: Val Badia, Val Gardena, Val di Fassa and Livinallongo.

By skiing the Sella Ronda, you will have the impression of having the Dolomites at your fingertips.

Let’s see now how to tackle the Sella Ronda ski tour, and what you should take into consideration for your journey on the Dolomites.

• Passes involved: Passo Sella, Passo Pordoi, Passo Campolongo, Passo Gardena
• The total length of the tour: the circuit is 40 km length, but the ski slopes are 26 km length
• The maximum height reached: 2,478 meters of altitude at Arabba-Porta Vescovo
• Longest run: 4.5km from Dantercepies to Colfosco
• Most difficult tracks: Porta Vescovo, Gran Risa and Saslong
• Time on cableways: approximately 2 hours (please consider the period of the year in which you are skiing the Sella Ronda, and add high season delay times)
• Estimated time of descent: it will take about 5 hours and a half (depending on the ability of the skier) to complete the ring 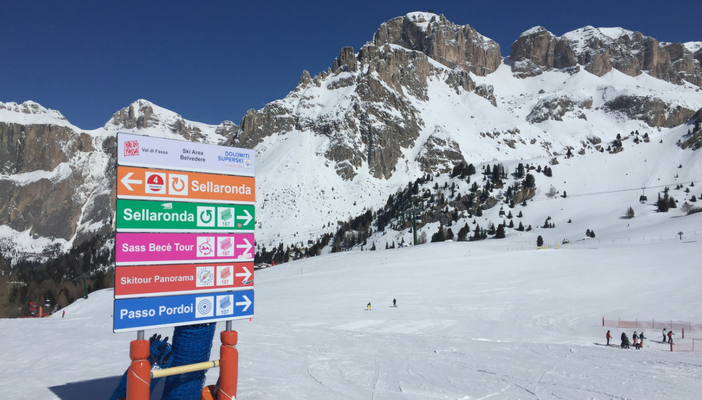 Practical tips to skiing in the Dolomites Sella Ronda

Best period of the year to ski the Sella Ronda

The slopes officially open at the beginning of December, and the ski season runs until April (sometimes even longer when it snows a lot). To complete the circuit of the Sella Ronda, it is necessary to have snow on all tracks. Alternatively, tourists can complete the route with buses or shuttles, that will get you to the desired track point.

The best period of the year to ski the Sella Ronda is from February to mid-March when the days get longer, and you’ll have an almost full additional hour of light to complete the ring.

During the last few years, winter seasons are more unpredictable, and it can occur to have meadow until Christmas and plenty of snow from January to May. If you decide to plan your winter vacation in the Dolomites on December, you’ll have to get on the slopes very early, to make sure you end the tour before sunset.

It is essential you check the weather conditions, to be sure it remains stable for the whole day. In case of a sudden change or with strong winds, some tracks may be closed for safety reasons, and skiers should, therefore, return to the starting point by “other alternative means”. 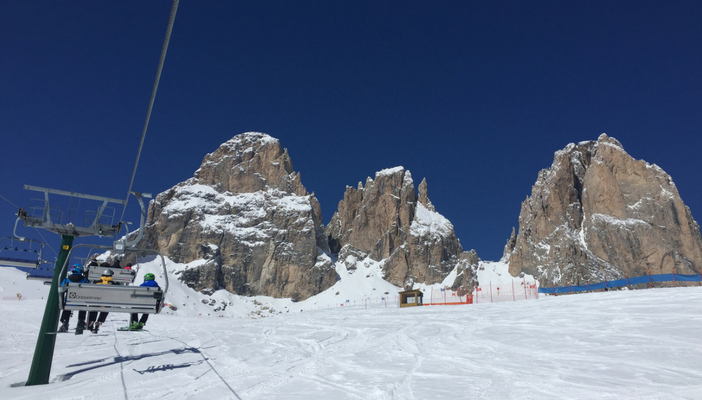 What a beautiful day to ski the Sella Ronda!

How long does it take to ski the Sella Ronda?

No one rule applies to everyone. To determine how much it will take, you need to evaluate:

Generally, with a medium-good level, the Sella Ronda ski tour can be completed in approximately a maximum of six hours. This means that you have to be on the slopes not later than 9:30.

Where to start to ski in the Dolomites?

Being the Sella Ronda a circular itinerary, there is no real start or arrival. Still, if you have no idea where to stay or where to go skiing the Sella Ronda, we suggest you sleep at Selva di Val Gardena, or Canazei if you prefer Fassa Valley.

Luxury accommodation in the Dolomites

If you love to face the slopes, Hotel Antares will be the best choice for you as it is exactly 200 meters away from the arrival of the Saslong slope. Saslong is part of the Ski World Cup circuit, and it is an extreme slope, made of steep descents and milder stretches. So, if you want to feel like champions for a day, go to Selva, Gardena Valley. 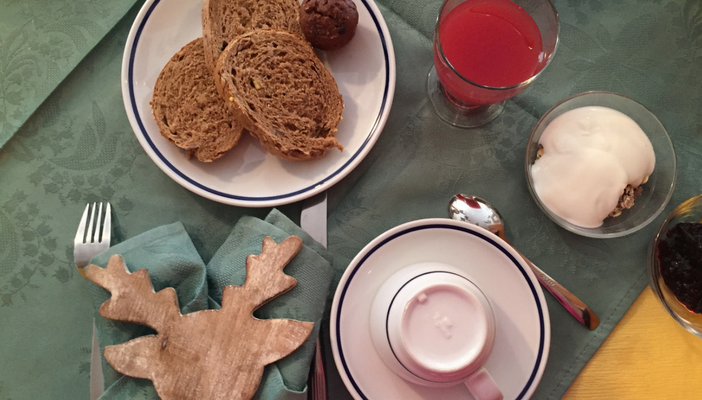 Budget room at the feet of Marmolada, Dolomites Italy

In the village of Canazei, the heart of Fassa Valley, Cesa Plamber offers both B&B accommodation and apartments in front of the huge Marmolada peak. From this B&B, it will take at least ten steps to be on the cableway and then directly on the slopes. So it’s super easy, cheap and comfortable to stay there for a winter weekend at the Dolomites. Not to miss the pool and spa close to the apartment, where you can relax after the Sella Ronda ski tour. 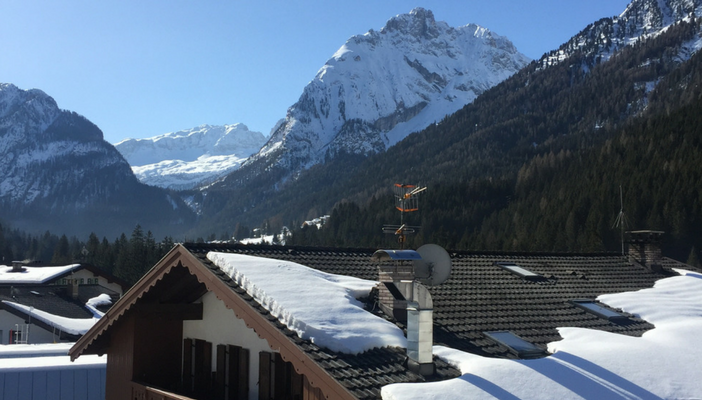 The beautiful view on Marmolada, the queen of the Dolomites, from our room at Cesa Plamber, Canazei, in the Fassa Valley

Where to buy the Sella Ronda ski pass

The Sella Ronda ski tour belongs to the Dolomiti Superski area. Thanks to 1,200 kilometres of ski slopes located in 12 different resorts, it stands out as the largest ski area in the world. This incredible journey is accessible with a single ski pass that can be even purchased online.

Skiing the Sella Ronda with kids

One of the most frequently asked questions is “At what age can children ski the Sella Ronda tour?”. Unfortunately, there is no real answer that is ok for everyone, nor is there a minimum or maximum limit– to try this adventure. To ski the Sella Ronda with kids, you need to have excellent physical preparation and be able to make challenging tracks (black slopes included). 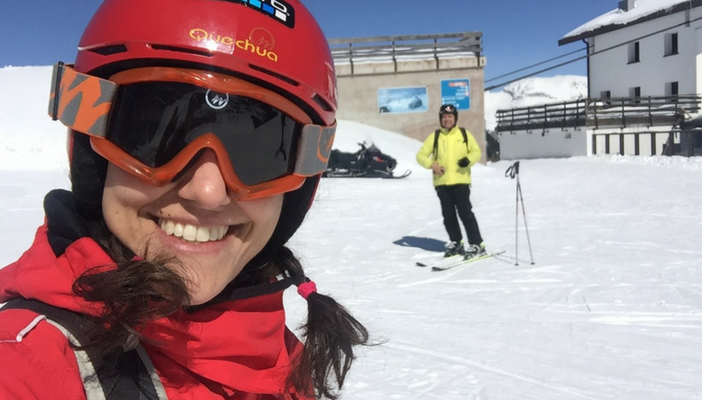 Do not overestimate your child’s abilities as it is essential to have the physical resistance necessary to stay on the slopes for the whole day. And even if you may think “my children can already ski all day long”, I guarantee that skiing on the same slope for 5 hours, and skiing for 5 hours straight on different slopes, are two different things.

I’m not saying this to discourage you. Still, when you do any sports activity with children on the snow, it is good to be wise and to take into consideration all the factors that can occur in a day, as you ski the Sellaronda. It takes just a moment to ruin a fun atmosphere. Far from referring to injuries, but “shit happens!” So please remind that the rhythms on the Sellaronda are very tight and if you are not 100% convinced that your children can follow you on this adventure, postpone it.

The Sella Ronda ski tour will wait for you to come back.

In search of other adventures? Give a look at these articles: 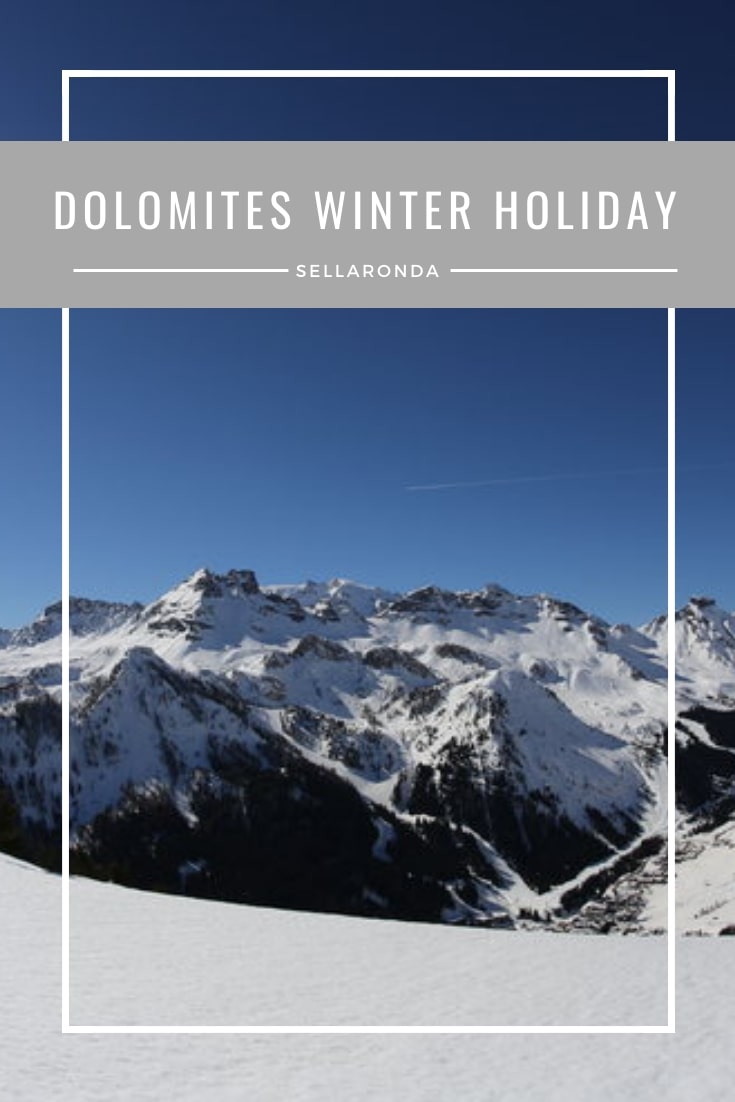 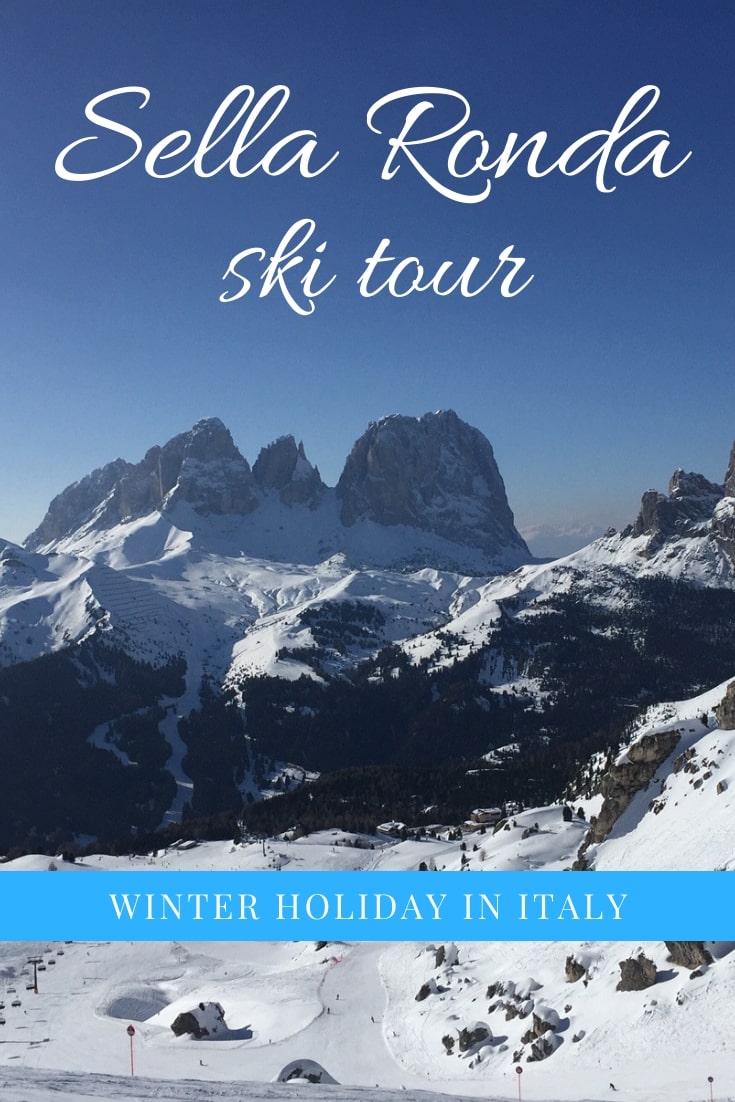