The Palladio Museum in Vicenza

Home » what to do » art & culture » The Palladio Museum in Vicenza

The Palladio Museum in Vicenza

It is often difficult, for people who are not insiders, to understand the meaning of drawings and items shown in a museum dedicated to architecture. Building plans, elevations or models showing how an architectonical idea or style has been created, and the many interpretations or solutions this idea can have, are really not easy to face issues. Especially if your job has never implied working with compass and set square or to deal with an axonometric projection.

The curators of the Palladio Museum knew this problem and planned it in order to make architecture easier for everybody. The multi-media devices created for the museum help a lot in understanding the artist’s ideas and arise curiosity to know more about this genius of Renaissance architecture. Yes, Palladio is considered a genius of architecture all over the world. His style made Vicenza become so fascinating that it is listed among the World Heritage sites, and many other cities in the world – as Washington DC  – took inspiration from his architectural ideas. 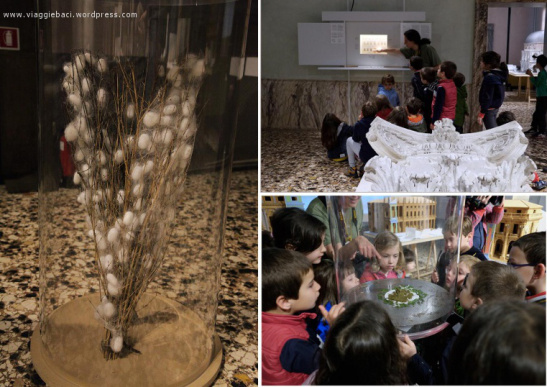 How to organize a visit with children to the Palladium Museum

If building plans, elevations or models might be boring for adults not directly involved in architecture, well, trust me, for the young visitors, who invaded Vicenza some weeks ago, they represented something definitely amazing. They loved to peep inside gigantic wooden “dollhouses”, to see through the windows how the internal spaces are organized, to snoop inside a huge cross section model of Villa La Rotonda. They were curious about the different architectonical  solutions the artist  has drawn for the same project and were happy to find out a scribbling  – that’s how they called it!- on the edge of one sheet.

The museum has not yet any space focused on children. The exhibition can, otherwise, with the help of multimedia devices and some tricks I’ll explain you later, become a lovely experience for all the family.
A god tip I give you is to study a little bit the Palladio’s style and works before visiting the museum (you can find some information here), so that you can explain to your children who this architect was, what he created in Italy and why he became so famous all around the world.

It’s time, now, to give you some tips on how to get your children’s attention in the different exhibition rooms:

1. As you get up to the first floor, you find a room with a huge Google Earth map on the wall. By touching the electronic screen in front of it, you can fly above Veneto and discover the Palladio’s masterpieces in Vicenza, Venice and the contryside: kids will live this experience as a breathtaking trip.

2. Over the second room’s desk you find two wooden models of Venetian villas: one is La Rotonda, by Andrea Palladio; the other is Rocca Pisana, built few years later copying La Rotonda’s model. Have fun trying to find the differences between the two villas and then try to guess how many villas around the world have been built copying the same idea. If you don’t know the answer, the slot machine on the opposite wall of the room, may help you.

3. The third room is dedicated to the building yards of the Palladian villas and the job organization in the XVI century. Have a look at Jacopo Bassano’s painting in order to discover the building techniques used 500 years ago.
One of the reasons of Palladio’s succes was his low-cost building technique. He worked for many years as a stone-mason, but when he became an architect he built villas and palazzi using mostly bricks. Palladio was used to whitewash them with marmorino in order to make them similar to stone. Thanks to this technique, Palladio could built wonderful houses which were cheaper than the ones built by other architects.
In this room you can see, through the microscope lens, three different types of stone used by Palladio for his works and touch by hand a stone block which shows the different steps of the stone’s working process.

4. The fourth room is a tribute to the rich Palladio’s clients and to the source of their richness. That’s why you find some silkworms  in the glass-box  positionated in front of Palazzo Barbarano’s model.

Yes! now you are observing the wooden reproduction of the building you are inside. Describe the palazzo‘s style and history to your children (have a look here) and defy them to discover the real building’s height and the materials which it is built with. The coloured elevation near the model’s façade and the black-and-yellow stick set on the table can help you in this. 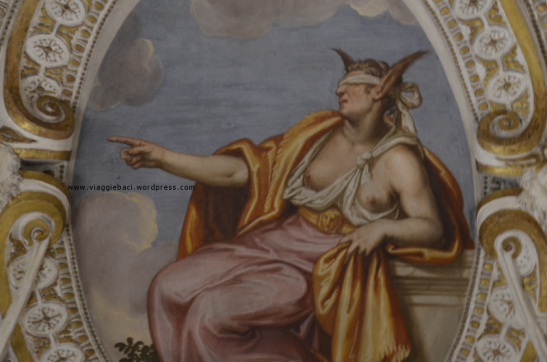 5. Once you get into the big hall it is time for the villas exhibition. If your children start to be tired, choose the most beautiful villa from the models and go to visit it live. You won’t regret it. Before leaving try to find out, among the ceiling decorations, an original 1848 cannon ball and to unmask the nobleman Montano Barbarano, dressed like the Roman emperor Marcus Aurelius.

6. In all the rooms you can admire the original drawings by Palladio coming from the Royal Institute of British Architects. Choose one of them and, with the help of the captions, explain your children the basics of the Palladio’s projects. Then, once at home, ask them to plan your new family villa following the Palladian rules: the result will surprise you!

Palazzo Barabarano: a wonderful location for the Palladio Museum

If it is impossible for Architecture being hosted inside a museum, in Italy the museums are often hosted in wonderful buildings: the Palladio Museum is there to confirm it.
Look at the rooms’ ceilings, walk up the big stairway, walk along the loggia or simply stare in the middle of the big entrance hall and you will understand you are inside a marvellous Renaissance dwelling-place. 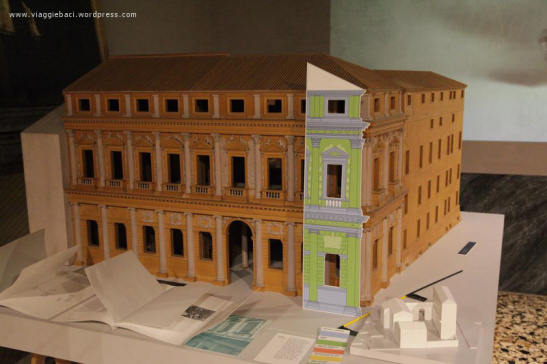 It is the palazzo that Montano Barbarano commissioned Palladio to built between 1570 and 1575. It is the only big building in Vicenza that has been completed while Palladio was still alive, since the others were mostly completed after his death.
For a long time it was considered the less Palladian of his works and only in the last years the critics start to recognize it as a symbol of Andrea’s genius.
Wandering in the ground floor with kids you can spend time trying to find the differences between the original project by Palladio and the façade that was really built, guess who the lady with donkey ears is, find out the heart-shaped capital in the courtyard and Montano Barbarano’s portrait in the firs left-hand room.

Just another thing …
Before moving towards your next holidays destination, have a walk around the palazzo. Vicenza, the most beautiful Italian Renaissance town, is waiting for you.