From Cinque Terre to Milan (or vice versa): a road trip itinerary

From Cinque Terre to Milan (or vice versa): a road trip itinerary

Cinque Terre are one of Italy’s most precious secrets. Every year millions of tourists come from all over the world to admire these five little villages. Once they have decided to include Cinque Terre in their Italian holidays, the first question they ask is how to get from Cinque Terre to Milan… or vice versa.

Milan Malpensa is the biggest airport for international flights in Northern Italy, and it is very common for incoming travellers to plan a trip from the capital of Lombardy to Cinque Terre. No matter how long your journey should last, let’s plan your itinerary. You might even visit Cinque Terre on a day trip from Milan, but taking time to explore Liguria more is a great decision, that you’ll remember forever.

How to get from Cinque Terre to Milan by car

Milan is 230km away from Cinque Terre, and if you drive straight there, it will take about two hours and a half.  There are two possible routes to follow, both on highways, “Autostrada” in Italian, which require tolls. The drive itself is easy and safe, but when crossing the Apennines the road becomes full of twists and turns, so be careful, especially if you have a manual car and you are not used to it.

These are the two possible itineraries:

Between the two, we recommend choosing the first one (including a stop in Genoa) because Liguria has so many hidden treasures that after a trip to the Cinque Terre, you’ll want to see more. Enjoy the Italian sweet “Dolce Vita” in front of the sea, tasting delicious food and Sciacchetrà, the local wine often paired with cheese or desserts, while kids play at the beach.

From Cinque Terre to Milan via Genoa

Let’s leave beautiful Cinque Terre behind us. A new journey is about to begin. After the checking out from your Cinque Terre hotel, you’ll be driving North-West towards Genova, and your first stop will be 66 km after Monterosso. In one hour you’ll reach beautiful Rapallo, where you can rest a bit before exploring the city of Santa Margherita Ligure, Portofino and mesmerizing Paraggi, a little bay framed by green hills and pure crystalline water. This area is better known as “Golfo del Tigullio” – Tigullio Gulf – with marvellous inlets, beach resorts and marinas. Alongside Cinque Terre, this probably the most famous place in Liguria

> Discover more of Portofino with kids < 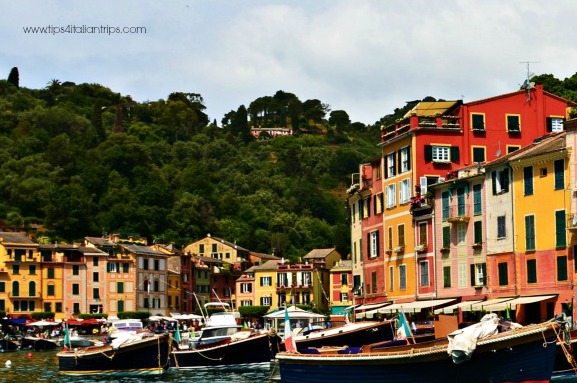 Your second stop will be 13km after from Portofino, on the opposite side of the Tigullio Gulf, where tourists can’t miss the villages of Camogli and Recco, the capital of Ligurian cuisine! Recco is worth a visit at lunchtime to taste yummy Focaccia di Recco, a special Focaccia with cheese that kids will love. 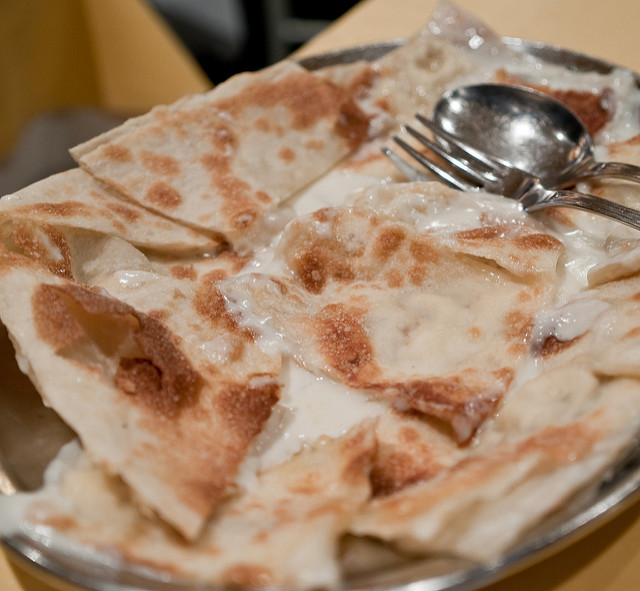 The city of Genoa

With the narrowest “caruggi” you’ll ever see – a maze of alleyways that can be seen around the city’s Old Harbor – Genoa can be a very charming destination for families. The hometown of Christopher Columbus has many interesting attractions related to its time as one of the four Maritime Republics and the history of the Italian Navy.
Genoa was also loved by Flemish painters during the Renaissance and houses one of the largest aquariums in Europe, making the city a wonderful place for art, history and nature lovers.

> Discover more of Genoa with kids< 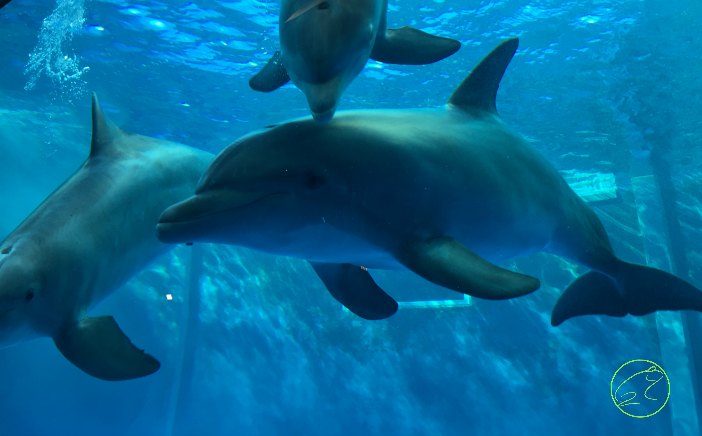 Serravalle: Let’s go shopping or enjoy a swim at a water park

Finally, you’ll head North towards Milan on A7 highway and 50 km far from Genoa, and you’ll reach the city of Serravalle Scrivia. It’s quite a famous place in Italy – and especially abroad – for shopaholics, as in Serravalle there is one of the biggest designer outlets in the whole country. Special buses (departing from Milan Central Station) are even organized to take tourists on day-long shopping trips, so if you are driving along the A7, why not stop for a while?
But in Serravalle you can also have fun with children, as there is a wonderful water park named “Bolleblu”, opened from June to September.

> Have fun with kids at the Aqua Park < 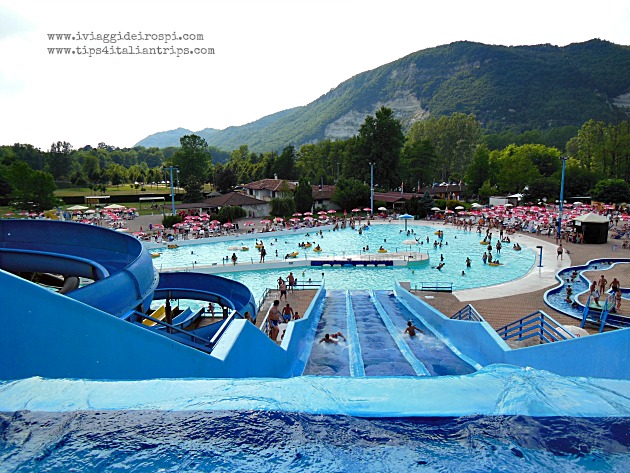 One hour and a half drive after leaving the BolleBlu water park and you’ll get to Milan. At the end of highway A7, pay your toll and drive for less than 5km. Our road trip from Cinque Terre to Milan is completed. You have reached your destination: beautiful Milan.
Now, the easiest way to discover the city is to park your car at Famagosta parking lot (you can find it on your left when you are approaching the city) and then take the underground line 2. Write down these two stops – get off at Porta Genova to visit the Navigli area and Cadorna to visit Sforza Castle and the most famous sights in the city centre. 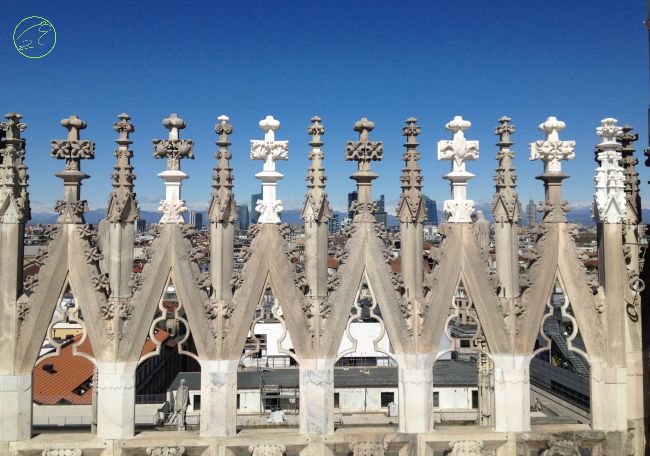 Do not miss the Duomo rooftop tour

From Cinque Terre to Milan by train

A quick note, but it is a must: if you are only exploring Cinque Terre, the train is also a great option. Exploring Cinque Terre by train is easier, cheaper and much more comfortable than driving between the villages. There is also a fantastic intercity train that will take you from La Spezia (or Monterosso) to Milan Central Station in three hours. No need to change. You board the train with a view of the sea, and get off in the heart of the city! 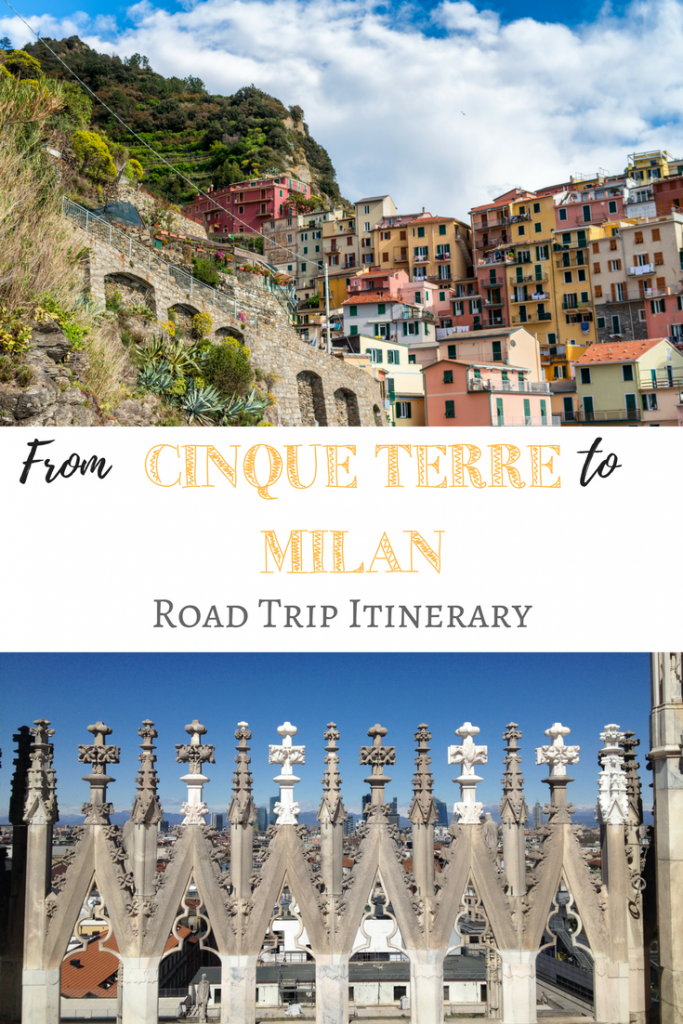 Check the itinerary on the map and plan your trip from Cinque Terre to Milan. You will not get tired of Italy, I promise!