Easter, Pasqua in Italian, is one of the most important celebrations in Italy. It involves many fascinating rituals and old traditions which have a deep meaning for Catholic people but can also be powerful and involve events for whoever is visiting Italy during this period.

From North to South, a series of processions, religious rites, festivals, sacred representations and folkloric traditions are set up in towns and villages during the Settimana Santa, to celebrate and commemorate the sacred drama of the Death and Resurrection of Christ. 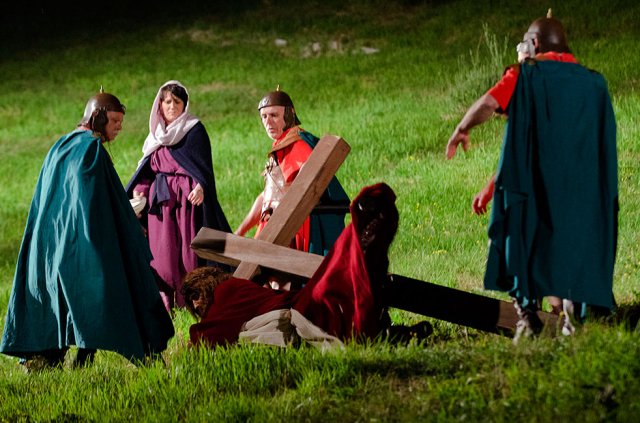 Usually, during the Friday before Easter Sunday, streets are lit by torches and a crowd of penitents follow – barefoot or in chain – statues of the Virgin and of Christ. Easter Sunday, instead, is much more joyful and Resurrection is symbolised by doves flight, fireworks, and delicious food.

The most beautiful processions in Italy

What’s believed to be the oldest procession in Italy takes place in Chieti in the Abruzzo region. This is a touching and suggestive evocation of the Passion of Christ, which has been played almost continuously since 842 and that attracts thousands of people from all over Italy.

The solemn procession, with statues of great artistic value, takes place during the evening of Good Friday in the main streets of the town centre. At the end of the procession, Christ’s coffin is put on a finely decorated mantle. The atmosphere is made particularly touching by the torches and candles in the streets and by the haunting notes of the Miserere by Saverio Selecchy, sung by a choir made of about 150 people.

In Fiorenzuola d’Adda, near Piacenza (a couple of hours from Bologna), on Easter Sunday locals play the “Pont e Cul” game, an old tradition dated back to the early ‘900. People gather in the main square, bringing hard-boiled eggs, usually coloured, whose ends are called pont (tip) and cul (bottom). They will compete in pairs, by pressing the tip against the tip. If one tip breaks, then they start pressing bottom against the bottom. If the egg breaks on both sides, then it is given to the winner who goes and compete with someone else.

Grassina, just outside Florence, in the Tuscany region, celebrates Good Friday with a massive parade and live scenes from Christ’s Passion. The representation takes place in a natural setting, between lanes, walls, gorse and olive trees, with texts and dialogues taken from the  Bible and music by the biggest musicians on Earth, such as Dvorak, Bach, Wagner, Verdi, and Beethoven.

In Florence itself, Easter is celebrated with the Scoppio del Carro. A huge, decorated cart is dragged by white oxen from Piazzale del Prato to the Basilica di Santa Maria del Fiore. Once there, an iron wire is deployed from the cart to the altar of the Basilica. Along the wire, a burning fuse slides along the wire toward the cart to ignite the fireworks contained in the cart itself. According to the tradition, if the explotion is perfect than it will be a lucky year for Florence.

While Easter mass will be held in every church in Italy, the biggest and most popular mass is held by the Pope at St. Peter’s Basilica. On Good Friday, the Pope celebrates the Via Crucis or Stations of the Cross in Rome near the Colosseum. A huge cross with burning torches lights the sky as the stations of the cross are described in several languages. At the end, the Pope gives his blessing.

The Monday following Easter is called la Pasquetta and it is traditionally spent outdoor. While the days before Easter in Italy include solemn processions and masses, Pasqua and Pasquetta are very joyous celebrations.

As any other celebration in Italy, Easter food plays quite a big role. Traditional Easter dishes include lamb or goat, artichokes, and special bread that vary from region to region (many of them have cheese as their main ingredient). Colomba (dove shaped) is a typical Easter sweet bread, which is often given as a gift.

Eggs are an important Easter symbol, as they represent life… The use of giving eggs at Easter is linked to the meaning of Easter as the festival of spring, fertility and rebirth of nature. The egg symbol of life and hope that is renewed fertility.

We use cookies to ensure that we give you the best experience on our website. If you continue to use this site we will assume that you are happy with it.
Accept
Read more