Our journey in the beautiful Apulia (Puglia region) goes on in a world made of trulli, blue skies and clear sea. But Apulia is not just this. There are less well-known lands, full of magic and perfect destination for children. The hinterland with its warm colors oozes of farmers’ traditions, history and legends. 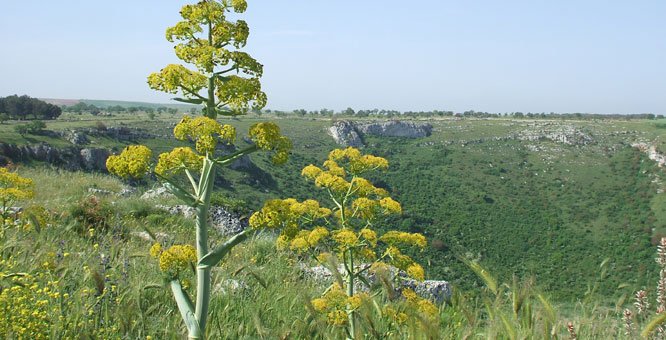 We set off again for another adventure in the charming Apulia, further down in the Murgia Jonica: 18 km from Taranto and at 110m asl, there is a place wrapped in mystery. It’s Massafra, also known as the Thebaide of Italy to underline the importance of its rock settlements. Here in fact, it is possible to visit exceptional relics of the past: the ravines of San Marco and the Madonna della Scala.

Have you ever heard of the ravines? From afar, the ravines look a bit like upside down mountains… In fact, they are massive canyons eroded in the rock by the water, whose depth sometimes reaches 100 m – with very steep walls, at times even vertical.

The most amazing thing is that in pre-historical times, these sites were inhabited by human beings who carved the rock to create their homes, their shops and their churches; they created proper underground cities, sheltered from the invaders. The so-called rocky civilizations.

When you get there you are left speechless by the natural awesome scenery combined with the mysterious and hard habitat of the rocky civilizations and the white mysticism of the Madonna della Scala sanctuary. The Buona Nuova sanctuary amazes you with its splendid frescos, whilst in its crypt, dozens of bats sleep quietly hanging down from the ceiling.

The most amazing thing for children and the curious tourist is walking through the 200 houses of the original rocky village, a site that was already popular in pre-historical times (findings were discovered from the Medium Neolithic and the Bronze Age), later abandoned in the classic ages, and then again repopulated from the III century A.D. and inhabited seamlessly until the XV century.

There are also the precious remains of the mysterious and enormous Cyclops Cave and the pharmacy of the magician Greguro, a massive complex made of 12 interconnected caves, where you can find workshops tables, pits, drying rooms, canals, a round tank, skylights, and hundreds of small niches especially carved in the rock as if they were shelves. It is around the year 1000 that emerged the legendary figure of the Magician Greguro who, together with his daughter Margheritella, picked, catalogued and learnt to use the medicinal herbs.

And if that was not enough, don’t miss the Medieval Castle of Massafra and its beautiful Museum – The Museum of Farmers civilization of Oil and Wine.

A bit further, 13 km from Massafra, we get slowly into the Cento Masserie (Hundreds Farms) territory: Crispiano. An itinerary away from the typical tourist paths, but suggestive and unusual, amongst olive trees, mills, manor houses and vineyards. Many different educational routes are available for families, like the itinerary on the footsteps of the famous bandits Don Ciro Annichiarico and Pizzicchicchio.

Children will enjoy the Museum of Farmers civilization, located in the old Tower and in the ground floor rooms of the Lupoli Manor.

The museum is divided into 9 rooms, each dedicated to a specific theme: farmers’ cuisine, old agricultural machines and an olive mill with its purpose-built kitchen. All other farmers buildings are also extremely interesting, representing a tangible sign of the different historical periods: the tower and its machicolation date from the late Middle Ages, the church from the XVII century, the stables used for animals but also as sleeping areas for the servants from the XVIII century and the manor house from the first world war. Entry is free, but you will need to book in advance (tel. +39 099 4596690/ +39 3358244269; e-mail:  info@masserialupoli.it).

Martina Franca is another necessary stop: little winding roads, cute small houses, gorgeous baroque buildings. Nor far from this charming village, have a look at the Borough Park Bosco delle Pianelle, the paradise of the hoopoe and orchids, an enchanting place for the children.

Grottaglie is the world of ceramics. Near Episcopio Castle, home to the Ceramics Museum, there are many labs where they teach children to work the clay. Before setting off, I recommend you to walk around the Ceramics Quarter, several craft shops excavated in the rock since the Middle Ages.

I would also recommend the excursion to the Riggio Ravine: a rock settlement, a waterfall – the only one in Puglia, a small lake and a torrent.

And once the exploration tour is over… ask your children what they have seen so far… rest assured that their trip recollection is going to be even more endearing than yours!